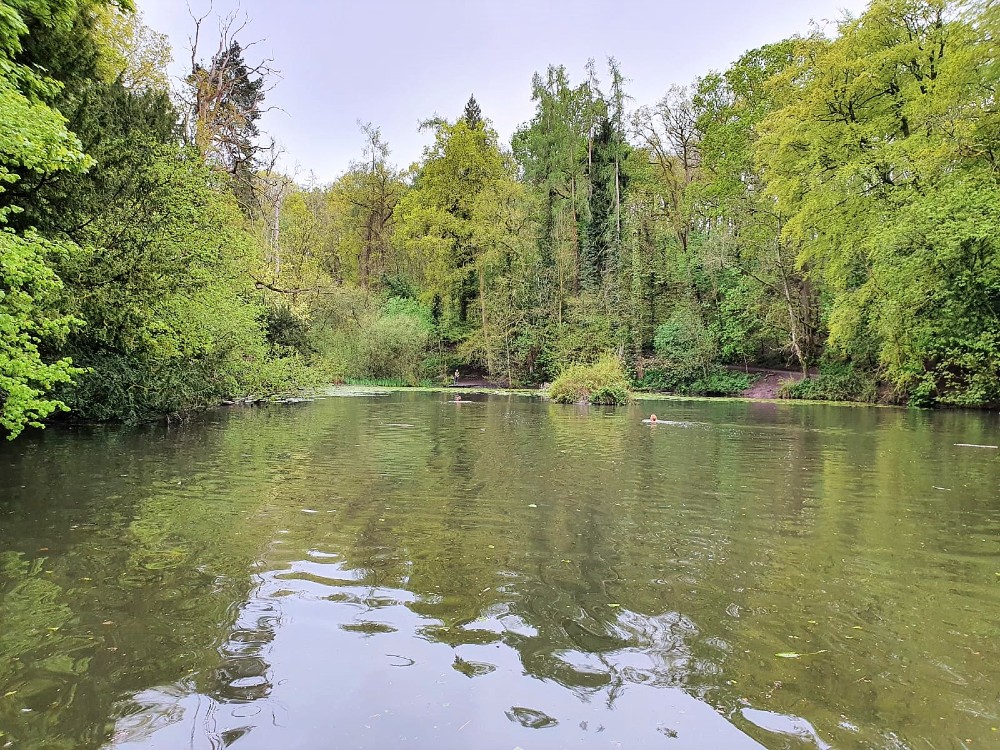 Reflections in the water – swimming ‘wild’ and cold

Reflections in the water – swimming ‘wild’ and cold.

My friends have been rolling their eyes and giggling at me recently as I answer the question “what have you been up to today?” with, “well, swimming of course!” And this has not been in swimming pools or leisure centres, but outside in the cold – in rivers, streams, lakes, large ponds, and of course the sea.

‘Wild swimming’ is another term that gained popularity over the pandemic, a welcome antidote and liberation (literally) to the word and reality of ‘lockdown’. But also, it provided a space for freedom and release for people after months of being locked inside and with no possibility of reopening leisure centres.

However, swimming outside in the ‘wild’ and cold is not a pandemic-induced or simply summer-y pastime of mine, it is one that binds me to members of my family, my muscles, sense of place and self, and the ever-enchanting wonders of our natural world.

(I use ‘wild’ with inadvertent commas as some swimming spots are human-made but designed to imitate the wild).

My family and swimming

I’ll start with my family. When my mum was pregnant with me and for a few years beforehand she had been asked to take part in a long-term experiment conducted by a health organisation in London to see if cold water bathing could help with the lowering of blood pressure.

My mum’s side of the family has very high blood pressure and during the course of the 3 year study she was required to lower the temperature of her baths twice a week, until she was bathing in ice! As it would happen, her blood pressure did lower for a period of time, including while she was pregnant with me.

Alongside this, my Auntie, Sushi, has been swimming regularly at the Hampstead Heath ponds, particularly the Kenwood Ladies Pond for 40 years. I used to revel in the opportunity to visit my Auntie by myself in London all throughout my teens; we would always take a trip through High Gate, look at all the famous peoples’ houses, then nip down the hill and swim for the afternoon in the Ladies Pond.

Everyone who was at the Ladies Pond knew my Auntie – I admired the strong communal feeling that had been created over the years and the solidarity between the women formed by their swimming rituals. It was something that I wanted to replicate and carry through into my own life as I grew up.

Sushi and my Scottish uncle, Lachlan, are also renowned for their appearances at the Ponds’ ceremonies, particularly on Christmas Day. On 25th December, for as long as I can remember, they attend a special Christmas Ceremony where they break the ice on the surface of the Pond and then swim to Lachlan’s accompanying Bagpipes. Whilst I always used to be waiting in anticipation on Christmas day for their arrival, as I have grown up, I have realised just how special and faithful their attendance at the Pond Ceremony is.

What I think tied the knot recently, though, for my appreciation and gratitude towards mine and my family’s ability to swim in the ‘wild’ was the strength it gave to my Auntie in fighting Covid-19. Auntie Sushi fell ill with Covid at the beginning of January, and come February was in an induced Coma, which was to last 25 days. This was an extremely intense and destabilising period for my family – a not unfamiliar set of anxieties many families have experienced throughout this past year or so.

After she (thankfully) recovered, we had news from the NHS consultants that her lungs were on course to fully recover. They said her lungs were very strong before the treatment and meant she was in a robust position to fight Covid; they were curious as to why. Auntie Sushi explained that her lungs were so strong as she swam 34 miles in the ladies pond over the course of Autumn 2020. Wow – what a heroine!

For me, this showed that swimming in cold water, the liberation from sticky-stressful-London-life into such  a beautiful Pond, bursting with wild-life, and the ritualisation of swimming in a communal space throughout her life were what saved her.

My aunt was not the first, and certainly will not be the last to benefit physically and mentally from the wonders and healing power of cold water swimming. The likes of Wim Hof and Katherine May have paid a lot of attention to how cold water swimming has helped them both through some of the most difficult and uprooting periods of their lives.

Friends of mine use some of Wim Hof’s breathing techniques to approach entering and swimming in cold water. One of them, Arthur, showed me that by taking 40 normal but deep breaths, followed by one breath out for as long as you can (for example, up to 2 minutes) and then repeating this process, you can enter the water without feeling the sudden and intense cold-shock.

It enables you to prolong the time you are swimming, and also helps you to control your breathing and relax whilst you are in the water.

If you have ever pressed your hands against a door frame for 30 seconds and then afterwards taken them off, you notice it feels as though there is a malleable bubble between your hands. This strange special sensation compares with the feeling of your body against the water after doing the Wim Hof breath.

These techniques have been instrumental for me to be able to swim during the winter months of this year, firstly in the Avon river with Arthur, and then what became my favourite winter-Sunday swimming spot – Pangbourne on the Thames.

Thanks to my inspiring friends, Nancy and Arthur, I have also recently had the opportunity to bathe in an ice bath (following in the footsteps of my mum) and put the Wim Hof breathing techniques to the test. All three of us managed to remain submerged in the ice for over 5 minutes at a time.

The ‘ZING-y’ and tingling feeling you get after being in cold water is so relieving and relaxing. It seems to zap away any worries and anxieties that were previously present and leaves you pleasantly tired.

Not only does swimming in cold, ‘wild’ water help boost our mood and stabilise our mental states, but it also deepens sleep, improves circulation, reduces inflammation and aids our metabolism and dietary functions. Studies have also shown it improves our skin (which I can vouch for – my eczema rarely flares up since swimming once or twice a week).

When I asked Nancy what the cold water does for her, she explained it gives her ‘head space’. Along with other practices of focussed breathing and yoga, swimming in cold water enables her to connect her mind and body together. She has found herself being more tolerant and able to deal with the everyday problems that us humans face; ‘there is no need to worry because by swimming and breathing regularly, I ensure I feel calm and in control.’

My own ritualisation of swimming ‘wild’

I have always had a deep love for swimming. I guess I first started during a time I do not remember when my mum took me to baby-mother swimming lessons. And, ever since, I have swum either at my local swimming club or for school at least twice a week. I count myself very lucky and privileged to be able to trust my swimming abilities and to feel comfortable in the water – it’s a powerful element and can be very unpredictable – particularly in the wild.

Since going to the Kenwood Ladies Pond in Hampstead Heath as a young teenager, I have remained drawn to exploring and visiting rivers, the sea, lakes and ponds in which to swim.

During school I became invested in a section of the Thames to swim near where I grew up because there is a bridge to jump from into the water and a floodplain next to the river where people can enjoy picnics and barbecues. It is idyllic for swimming and socialising.

When I returned from university and living away from home at the start of the pandemic in 2020, this place one again became my safe-swimming-haven and I visited it during those long spring and summer months almost daily.

Into the winter and then the spring of 2021, I continued to visit the river – it had become, as I had intended it to be, a ritual. I felt so at peace there, watching the birds dance in my foreground, cycling to and from, and being my own commander.

Recently, I have moved to Bristol and have eked out many spots to swim outside. I have had the pleasure of my water-sister, Nancy, as company. Only recently has it been hot and ‘relieving’ to enter the water; we have been swimming since April in very cold water, enough that we could see our breaths cloud-up in front of our faces as we swam.

We have been swimming at various spots: the river Avon (near Beeze’s pub), Warleigh Weir (Bath), at Clevedon sea pool, the River Chew in Publow and the River Yeo in Yatton.

But what has become our most sacred swimming spot is: Abbot’s Pool, in Leigh Woods.

Originally built by the Romans for bathing, the pool was used for a period by medieval monks to farm fish. Now, at least for Nancy, and I, Abbot’s pool, lined with its lily pads and tall trees which also mark out a pool in the sky, is our safe-swimming-haven.

We have been going to the Pool once or twice a week since April, allowing us to observe the landscape change – not only temperature wise, but also in terms of colours, blossoms, wildlife. Yesterday when I visited, the rhododendron flowers had come out so vibrantly I thought a purple banner had been suspended and unravelled from a tree!

Abbot’s pool is our space for connection to earth, water, ourselves, and each other. This resounding sense of community and spirituality hit home when we visited the pool for a sunrise swim and a full moon swim.

To the rising sun, we swam to the drumming of woodpeckers and the expressive bird song reverberating around the luscious trees and shrubs. To the rising moon, there were 5 of us women, along with other separate groups of women who had come. After swimming in the darkness, we sat by candlelight and read stories to one another – it felt like we were reviving the souls of history.

So, let us continue to revive history, open ourselves to the healing and spiritual properties of water and go forth and swim!