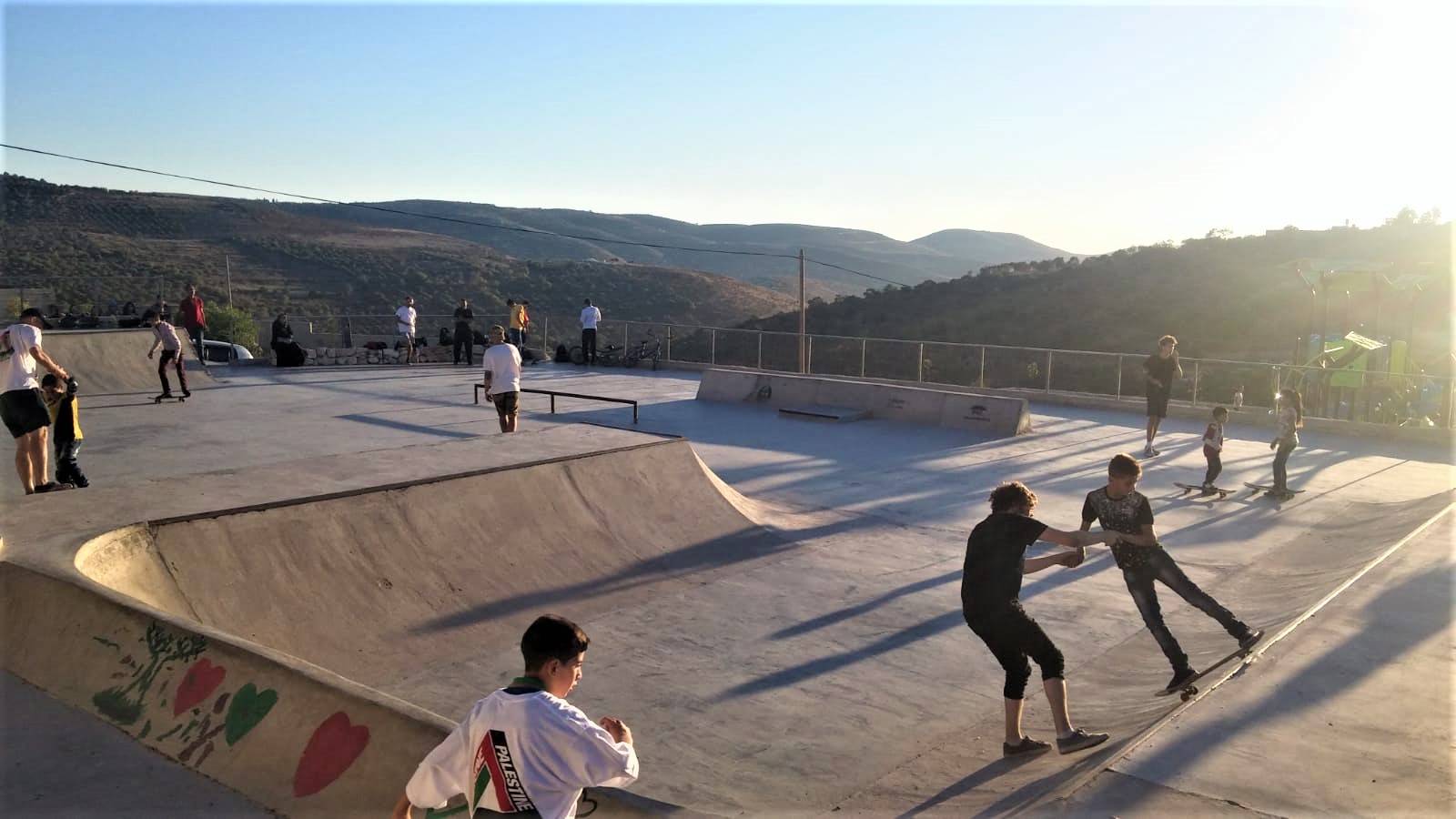 Two adventures in Palestine with SkatePAL

In light of the recent flare up of violence between Israel and Hamas that has left hundreds of Palestinians dead as well as thousands injured, there is no better time to remember and celebrate the amazing people and places that make up this ancient contested land. The history of this conflict is complex, but the loss of life and damage to wellbeing and progress is stark and simple. Any attempt to bring back notions of common humanity, unconditional kindness, and shared ideas of beauty and belonging is crucial. No charity does this better than SkatePAL, an organization that has built skateparks in the West Bank and continues to recruit volunteers to share the beauty of skateboarding with the children of the West Bank. In July 2016 I was fortunate enough to spend a month working with them in a village near Nablus, teaching skateboarding on weekdays and discovering the marvels of this amazing land and people on the weekends. These are two short accounts of what I found in the West Bank.

During my time volunteering with SkatePAL I travelled with six companions from Ramallah to the Dead Sea. The bus dropped us off at its northern shore, and we were greeted with a barbed wire fence which separated us from the water’s edge. Signs indicated that it would cost 60 shekels (£12) each in order to enter this guarded Israeli beach that stretched out in both directions as far as the eye could see. The included sunbed wasn’t much of a selling point for us, so we returned to the main road in the hope of hitching a ride further south to an unguarded area of beach. The six of us waited no more than 5 minutes with our thumbs up before a small car pulled over with two Palestinian guys in the front seats.

With the front seats occupied we expected three of us at best to ride along in the back seats. We assumed wrongly. We were ushered to put our bags and skateboards in the boot and cram into the back seats. Three of us sat down, and three more piled in on top. Success! Whilst the drivers spoke very little English, and us very little Arabic, the warmth of their company transcended the language barrier, and were soon having a laugh together in the grossly overfilled car. The landscape visible from the car was stunning, on the one side was towering yellow/brown cliffs dotted with cave entrances and salty deposits left by long since dried up streams. On the other side was the vast Dead Sea stretching across to Jordan on its East side.

The car stopped just before an Israeli checkpoint and we all piled out of the back seats. We hopped over a roadside barrier and walked down past a ‘trespassers will be prosecuted’ sign towards the water. We dropped our stuff and walked on the empty beach down to the water. The mud was a sort of marble colour, really soft, and deep. As I plunged my body into the water I was surprised to feel like I was wearing some kind of magical buoyancy aid. The high concentration of salt in the Dead Sea made it virtually impossible to fully submerge my body, not even for a second. Whilst the floating sensation was enjoyable, the persistent stinging of small cuts and grazes that I didn’t even know existed (due to the salt) hastened the novel bathing experience. After covering myself in the allegedly dermatologically beneficial dead sea mud, I lay on the beach with our new Palestinian companions, who at this point had already begun happily sharing their bottle of vodka.

After watching the sunset we piled our six now salt crusted bodies back into the car and began our journey North to Jericho, the home of our drivers and fortunately en route to where we were going – Ramallah. Having accidentally swallowed the saltiest sea water in the world, glugged vodka from the bottle, and not brought anywhere near enough water, we were desperately thirsty. Unable to fully communicate the extent of our thirst our friends charged on past roadside shops, leaving us waiting, lusting, to purchase just a drop of water to quench our thirst. We were sure at least one of them must be selling water so why wouldn’t they stop? Where exactly were they taking us? The car pulled up in a back alley of Jericho, not a shop in sight. I got out of the car, frustrated, tired, and thirsty. Suddenly I heard gushing water, and my doubts evaporated as I watched our Palestinian friends smiling and beckoning us to join them as they drank and refreshed themselves in the free-flowing fresh spring water of Jericho. Crisp, fresh, and almost certainly the finest water I’ve ever tasted or had the pleasure of bathing in.

As we studied our phones to work out the remainder of our journey from Jericho to Ramallah, our new friends briefly spoke between themselves before ushering us back into the car. Despite our protest they insisted that they take us there, although by back roads so as to avoid police that would be less than satisfied with eight people in the five-seater car. Once again, we crammed back in. An hour later we arrived at our final destination in Ramallah, deeply thankful for the incredible kindness we had experienced in the company of these new friends. Having driven us in joyful style for so long we insisted on at least contributing to their fuel. Our insistence proved no match for their strength of character. After a warm embrace they drove away without accepting a penny

Inside the Dome of the Rock

By the time Anes (fellow SkatePAL volunteer) and I arrived in Jerusalem it was late in the evening, so we set off in search of ‘Citadel hostel’ which google had suggested offered cheap accommodation. On arrival we were told that the cheapest accomodation they offered was a mattress on the roof under the stars, which cost a very reasonable 50 shekels (£10). We climbed up the steps onto the rooftops of Jerusalem, and found most of our floor-mates already asleep. We quietly put down our bags and enjoyed a couple of smokes in view of the magnificent golden Dome of the Rock and the Holy Sepulchre, attempting to grasp the awesome historic and contemporary significance of the sight which lay before us. Despite not being religious, the spiritual potency of being inside the holy city of Jerusalem was undeniable.

At this point, we were beginning to think that sleeping under the stars in Jerusalem would be a novelty experience, and should be priced far higher than the mere four walled abodes beneath us. We went for a walk to get some food and began exploring the old town before settling down on the rooftop under the stars. We were rudely awakened by the baking sun at 8am the next morning, by which time most of the other roof dwellers had packed up and moved on. The novelty value of the rooftop experience had now fully expired, leaving only the thin mattress, insufferable heat, and an insufficient 5 hours sleep to speak of.

After enjoying the sights, smells and skate spots of Jerusalem we took a deep breath. That night was the end of Ramadan, signifying the beginning of Eid, which is a celebration comparable to the Christian celebration of Christmas. For the beginning of Eid, there is a special prayer at 3am in the morning that essentially begins the celebrations, and over the next few days families, friends, and strangers get together to appreciate abundant food and the small luxuries of life. My companion Anes comes from an Algerian Muslim family, and so he was eager to take this once-in-a-blue-moon opportunity to pray with thousands of Muslim pilgrims in the heart of Jerusalem at the prayer hall in the compound of the spectacular Dome of the Rock. However, due to the high attendance, only Muslims are allowed to pray at the Dome of the Rock for Eid, and the entrance is guarded by armed soldiers. We set about hatching a plan.

Anes was the expert here, so I took his lead that this was a good idea. I put on my kit, and we set off.

When we arrived at the grand gates of the compound the air was electrified with the buzz of thousands of people gathering for this special event. Nestled inside the crowd we walked straight past the guards and through the front gate without question. Success. Our eyes were met with the spectacular yet intricately detailed marvel that is the Dome of the Rock. After several minutes of jaw dropping awe, we walked to the entrance of the large prayer hall, took off our shoes, and joined our spiritually cleansed companions who were about to finish their month-long religious obligation of dawn till dusk fasting. At 3am the PA system fired up, and a volley of Arabic was fired into the enormous ornate room. I followed the lead of the people around me, and performed the bowing, kneeling and standing of the prayers as best I could. Aside from a slight push at one point from the man next to me urging me get back in line, it seemed to be largely successful. I was in awe of the spiritual fervour of all those around me, and was sure that I felt the strength of their belief. I wondered about what positive effect this ritualistic five-times-a-day spiritual focus had on the wellbeing of Muslim communities, and pondered whether the largely atheistic Western world was missing out on some of this benefit.

After the prayers we lay down on the soft carpet and slept soundly in the prayer hall until around 9am (it is totally legit to sleep in a mosque if you have nowhere to rest your head). We were awoken by calls from cleaners to get up and claim our shoes from the hundreds that still remained outside the mosque, and I wondered how often people traded up their miscellaneous brown sandals for slightly newer ones. That afternoon, we set off back to our SkatePAL base in Asira, gleaming with the success of our trip.

Thanks to the people who I met, my memory of this time spent in the West Bank is dominated by joy, appreciation, and wonder. Now more than ever the people of Palestine need to be listened to, understood, and respected. The Israeli government continues to illegally annex the West Bank at a rate that will soon swallow up the entirety of this land, people, and culture. Whilst the people of the West Bank peacefully protest this robbery to no apparent avail, others see no other option than to turn to violence. In the short term 1,800 wounded people and countless more displaced citizens of Gaza urgently need donations from citizens of the world who were born in a less war-ravaged land. In the long term, there are countless people, places, and ideas waiting to be visited and explored by anyone who is curious to experience this wonderful country for themselves.